Originally used to cast sculptures and other “works of art”, it is now used to cast some of the most complex castings for some of the most critical applications. From molds for small candy-coated chocolate morsels to jet engine turbine blades, from a few grams to several thousand pounds, the process provides millions of castings that meet everyday practical needs.

Every casting produced by the process starts as a disposable wax duplicate (thus the term “lost wax”) that is injection molded in a permanent die built with allowances for the process. Wax shrinkage, refractory shrinkage and alloy shrinkage are all factors considered when cutting the die cavity. Very complex shapes can be achieved by incorporating the use of soluble wax cores and/or preformed ceramic cores or a combination of both into the wax part. Each wax part is then assembled with the runner or sprue system, also called gating, to form what is commonly called a “tree”, “case” or “setup”. A tree can consists of one wax part, or in some cases, hundreds of wax parts.

With very few exceptions, the ceramic shell has replaced the solid mold method of investing the wax assembly. This is accomplished by dipping the wax assembly or tree into a ceramic slurry followed immediately by a coating (stucco) of dry refractory grain. (The composition of the slurry and refractory grain is selected primarily based upon the alloys cast). The coated assembly is then allowed to dry in a controlled environment. The dip, stucco and dry steps are repeated until a shell of sufficient thickness has been formed. Typically a minimum 3/8 inch thick shell is required to achieve a green strength capable of withstanding the pressure of wax expansion during de-wax. Since investment shells are cast unsupported, it is also necessary to have a fired strength capable of holding the weight of the metal cast, another consideration for determining the shell thickness. 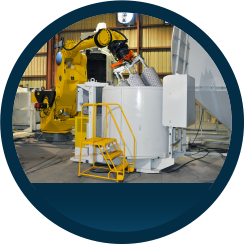 When the shell is complete, it is necessary to remove the wax invested within. This is accomplished by either placing the shell into a steam autoclave or directly into a preheated furnace. To minimize shell cracks from wax expansion, it absolutely necessary to reach de-wax temperature in a very few seconds. As the wax melts it exits the shell through the runner or sprue system of the assembly. After de-wax, the shells can be stored in an uncontrolled environment until scheduled to cast.

Prior to casting the shell is fired primarily to develop the fired strength of the ceramic (green or unfired shells have insufficient strength to contain the metal), and secondarily to remove any traces of the wax. After proper firing, the shells are removed from the furnace and immediately cast unsupported. The metal enters the shell through the runner or sprue system, which must be of proper design to prevent metallurgical defects due to improper gating.

Because of metal shrinkage during solidification much of the ceramic shell literally falls off the castings; however, additional cleaning is required to remove all the shell material. This is normally accomplished mechanically and/or chemically.

Following initial shell removal, the individual castings are removed from the gating system by some means of metal cutting. Any additional cleaning and processing steps are then done to furnish a completed investment casting meeting all the customer’s expectations.

Located outside of the US? Click Here for location information and international phone numbers.

Found out about the latest products, technology, and trade events we are involved in. Click Here
Vulcan Engineering Co.
Copyright © 2022 All Rights Reserved
iThemes Builder by iThemes
Powered by WordPress